My home away from home for the past few years ~ kicked in the face by Hurricane Matthew....

- October 08, 2016
Watching the news reports on Hurricane Matthew and seeing the devastation it has caused first in Haiti, then in Florida, and now up the coast, is surreal. The first photo I saw of the FL coast was that of the tiny little beachside town of Flagler Beach. This happens to be the town in which my good friend lived in, and in which my bike (Suzi) has vacationed for the past couple of years. In fact, the garage in which she lived was across A1A from the ocean... Less than 1/4 mile from where A1A was tossed around and takenout to sea.  My friend relocated to Texas before I could fly down, so she was not there when I flew in 9-1-16 to ride Suzi home. I went to Flagler Beach and to the Pier 'one last time', to soak in all of the fun times and memories made in and around that town. I visited there all of maybe 10-14 times over the course of 2-2.5 years (dates escape me now) and yet, got to know many of the locals pretty well. Flagler Beach is a cozy, laid back, beach community that welcomes anyone and everyone into their culture. It's a great place to have spent so much time. But to see the photos and news reports of the devastation that Hurricane Matthew has caused to such a great community is quite surreal.   The photo on the left was my visit to Flagler Beach last month. The photo on the right is today :( 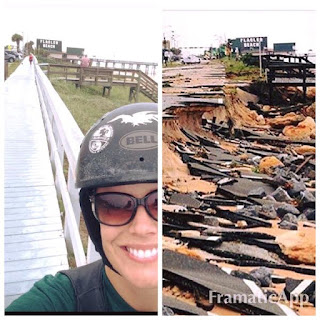 One month ago when I flew into FL under a hurricane watch, turned warning, turned hurricane - I had no idea what a 'hurricane' was. For some reason I was thinking it was like a tornado - slams down out of nowhere, destroys stuff, and an hour later its all over. Hurricane Hermine had 68 mph winds, dumped over 9" of rain on top of me, beat me up, pushed me around, and tested my riding skills to the very core for over 10 hours - and that was NOTHING compared to Hurricane Matthew. I am in no way 'experienced' in that type of weather, even now, having ridden through it and lived, I know nothing about what people have to do to prepare or how they stay safe during such wicked weather. But I have a ton of respect for those who did evacuate and those who stayed - regardless, it left a path of devastation not only in Flagler Beach, the town I hold close to my heart, but all the way up (and down) the coastline. The recovery from the storm is sure to take a toll on people, and while I am happy to report all of my peeps are OK, there are many who didn't fare well and my thoughts go out to them!